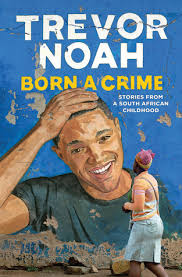 In the book born a Crime, Trevor Noah describes how he grew up in Johannesburg, South Africa, the hardships and trials he and his mother faced and how they overcame them with humor, love, and faith. The book Chronicles the author’s life from the time he was born during Apartheid and his life post Apartheid as a half-black half-white boy. The book is funny and witty, yet it accurately drives home the cruel reality of the system of Apartheid and how it divided the South African Society.
Mr. Noah does a commendable job in narrating the book. The way he manages to describe even the lowest moments in his life without depicting himself as a victim but rather as a survivor is noteworthy. The book is a package of moments filled with joy, fun, sadness, bravery, foolishness that makes it so real to readers and draws them into its world.
Through his book, Mr. Noah gives the reader a deep insight on how Apartheid divided the different races in South Africa into the blacks, the mixed and the Whites. The way in which he as a mixed-race child processed his identity while living in such a divided society. What is remarkable is the manner of self-recognition that the author describes, of his journey of how he came to identify himself as a black man after constant struggles and what lead to that recognition.
This Memoir by Trevor Noah although is about his life but one cannot miss the large part his mother a plays in the book, which makes it seem more like her story. The story of her bravery during and after apartheid and how courageously she faced domestic violence in the world of patriarchy. Of how she rebelled against a system she found was absurd and instead of bowing to it like many others, gave birth to Trevor Noah, the son of a white man. He describes his mother as a very religious, funny, brave and hardworking woman, and yet a strict but loving mother in the book. Mr. Noah captures the essence of both his and his mothers journey beautifully throughout the book. The notes at the beginning of every chapter help the readers better understand the events the subsequent chapter is about to narrate.
Mr. Noah’s shows excellent insight in the way he describes the racism and bigotry that he and his mother faced. He keeps the tone of the book light-hearted even when he is depicting the hard reality of racism. His sharp perspective of racism, domestic abuse and identity conflict as a person who has been through them helps the reader to further relate to him.
Born a Crime is a highly entertaining book which is relatable to its readers in many ways. From the accounts of Trevor’s mischievous childhood to the challenges he faced growing up are relatable to a reader in many ways and thus also highly enjoyable.